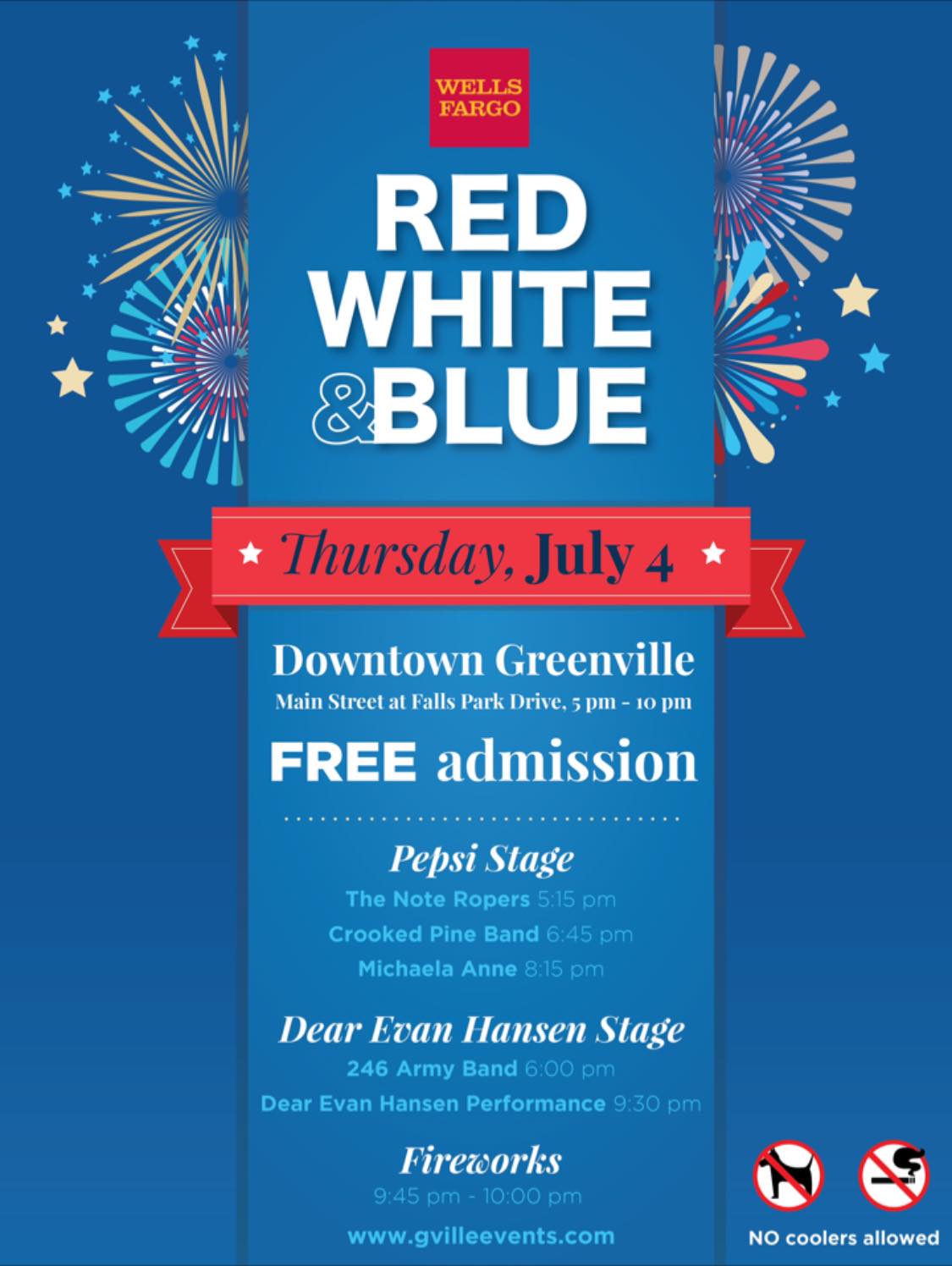 (Greenville, SC) Wells Fargo Red, White and Blue festival, the City of Greenville’s annual Independence Day celebration, is returning to its original event site on Main Street, between Court Street and Falls Park Drive. The free event will take place Thursday, July 4 from 5 p.m. to 10 p.m. and offer a full evening of entertainment, including live musical entertainment, a special performance by the cast of Dear Evan Hansen, a variety of popular food and beverage vendors and one of the largest fireworks displays in the state.

“We are pleased to continue our sponsorship of the Red, White and Blue festival as we celebrate the founding of our great nation,” said Wells Fargo Region Bank President Justin Hawkins. “It helps demonstrate our ongoing commitment to building strong, vibrant communities and making a positive difference for everyone. One of the many ways we do that is through our dedication to serving and honoring military members, veterans and their families. This year, we are proud to honor one of our local veterans, retired Sgt. Chad Wooten, who served in Iraq and the Pacific region.”

Attendees will again be treated to a spectacular fireworks display synchronized to patriotic music and the event will be simulcast live from 8 p.m. to 10 p.m. on radio station 92.5 WESC. The fireworks show will begin at 9:45 p.m. and the best viewing will be on Main Street, from Court Street to Falls Park Drive, and in Falls Park. A full entertainment schedule is included below.

The City has worked to maximize public safety and to minimize traffic delays, both coming into the city and leaving the downtown area. To assist in those efforts, festival-goers are urged to plan their routes into and out of the city and to park in a garage or lot located in the section of downtown closest to where they are coming from. For example, recommended parking locations for motorists entering downtown from Hwy 123 would include the River Street and Poinsett garages; for motorists entering downtown from I-385, recommended parking locations would include the Church Street and Commons garages.

To aid residents and visitors who are planning to attend Wells Fargo Red, White and Blue, the Greenville Police Department has developed a map that includes the festival site, downtown parking locations and planned traffic control patterns. A copy of the map can be downloaded at http://gvilleevents.com/RWB.

Event attendees are invited to come early and bring lawn chairs and blankets. Pets and coolers are not allowed at Wells Fargo Red, White and Blue. Additionally, tailgating in City parking garages is not permitted. Fireworks are not visible from the North Laurens, Richardson Street, Poinsett, River Street, Riverplace and Spring Street garages.

For more information, visit gvilleevents.com or follow the City on social media.

Event Schedule:
5 p.m. – Festival begins
5:45 p.m. – Presentation of Wells Fargo Military Hero Award at Dear Evan Hansen Stage
8 p.m. – Live broadcast of the event on WESC 92.5 FM. A Salute To America will give event-goers the opportunity to listen to a simulcast of the soundtrack live on the radio.
9:45 p.m. – Fireworks launch (best viewing is Main Street, between Court Street and Falls Park Drive)
10 p.m. – Festival ends