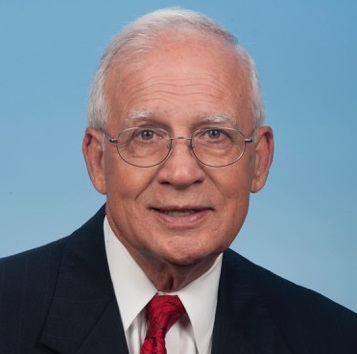 Major General Darwin H. Simpson began his 39-year military career in the Arkansas Army National Guard in 1964 as a private E-1. In 1967, Simpson graduated from the Army’s OCS program and was commissioned as a second lieutenant. Throughout his career, Major General Simpson held numerous staff and command assignments, including commanding general of the 228th Signal Brigade and commanding general of the 263rd Army Air and Missile Defense Command. He is a graduate of the Command and General Staff College and the US Army War College. His awards include the Legion of Merit, Armed Forces Expeditionary Medal, the Humanitarian Service Medal, South Carolina’s Order of the Palmetto. Major General Simpson is a Veteran of the War on Global Terrorism and was inducted into the OCS Hall of Fame in 2007.

As a civilian, Darwin H. Simpson is the retired president and CEO of Univar Corporation, a global chemical distribution company. He holds a Bachelor of Science degree in chemistry from the University of Arkansas at Little Rock, and an master’s of business administration from Pepperdine University. Simpson is active in our community and serves on a number of not-for-profit boards. He is an elder and former deacon at Spartanburg’s First Presbyterian Church, chairman of the Board for the Spartanburg Humane Society, chairman of Spartanburg Regional Hospice, past chair of St. Luke’s Free Medical Clinic, past Board Member Patriots Point and Healthy Smiles, past president of Palmetto Council Boy Scouts of America, past president of Spartanburg Downtown Rotary, chairman of Board of SC Military Family Care Association, and chairman of the National Medal of Honor Museum Foundation. In addition to his community and governance board service, Simpson was awarded the Kiwanis Club of Spartanburg 2011 Citizen of The Year, 2012 Algernon Sydney Sullivan Award for Excellence of Character and Service to Humanity from Wofford College, 2012 Recipient of the Alan Willis Society Service Award from the Upstate Employers Association, 2016 Recipient of the Neville Holcombe Distinguished Citizen Award from the Spartanburg Chamber of Commerce, and the Wright Brothers Master Pilot Award from the FAA for over 50 years of flight service. He is a past Trustee of Wofford College. As a volunteer, he serves as the director of the Spartanburg Downtown Memorial Airport. He is married to Bonnie Simpson, and they have two children, Melissa and Brad, and three grandchildren, Page, Mac, and Clive.