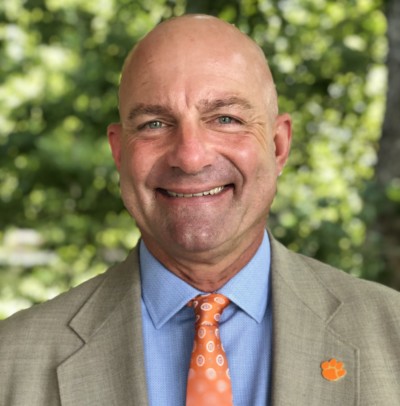 Tracy Swinney served as a police officer for the state of Alabama for 25 years. He retired in May of 2012, and currently, he serves as director of Football Security and Community Liaison for the Clemson Football program.

Since June of 2012, Tracy has been responsible for the safety of the football facility, players, and coaches. He is the liaison to law enforcement in other states while the team travels. His responsibilities include coordinating logistics and safety procedures at the hotel, stadium, airport, and security at the practice facility while the team is at home.

Tracy serves on Dabo’s All In Team Foundation, which was founded by his brother Dabo Swinney. Dabo’s Foundation focuses on breast cancer awareness, along with other local charities.
Besides serving on the Upstate Warrior Solution board, he is also a board member for the Upstate Heart Association, as well as a board member for The Family Effect and The Foothills Area Y.M.C.A.

Tracy was born in Birmingham, Alabama. He is a graduate of Pelham High School and Samford University in Birmingham. Tracy is married to Tammy Swinney, and they have four children and one grandchild.